Studies in Educational Research and Development

Aim of the present is to completely investigate mind structure of Ataturk as sociological term. This investigation was conducted in the light of historical, social and political developments. Gadamerist Hermeneutic Analytic Circle was used. According to this Ataturk’s contemplation nation is not for state, state is for nation. Contrary to the prevalent opinion, in Ataturk’s philosophical approach, nation is essential not state, nation is final aim and sociological stage. Moreover, it has been missed that staff who is launching national independence war and founding the state is civilian. His civil political philosophy is closely related to the philosophy of pluralistic education. Ataturk’s love of nation is not suffocating, hegemonic and based on possession, it is empowering, individualistic, and feeding national character, producing, and philo-sophia (philosophy) notion. Having seen an inevitable relationship between ways of thinking and forms of society, Atatürk changed the Turkish nation's information system  as a sociological terminology.Atatürk, who was recognized as a unique educator or a well-known educator by educational scientists, showed a stance against the civilized world with his change of mind in his country.  On this target, Atatürk's educational philosophy and education policies not totalitarian were quite different from those of other statesmen who were contemporary. Describing democracy as a love of the country, Atatürk considered the necessity of active patriotism which took responsibility for his homeland to recognize national sovereignty (republic), democracy and equal political rights of all citizens. These are important results obtained here. 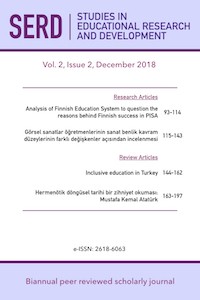